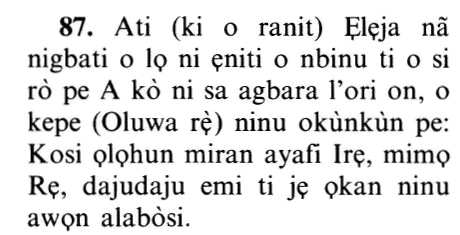 This story is mentioned here, and in Surah As-Saffat and Surah Nun.

Yunus bin Matta, upon him be peace, was sent by Allah to the people of Nineveh, which was a town in the area of Mawsil (in northern Iraq). He called them to Allah, but they rejected him and persisted in their disbelief. So he left them in anger, threatening them with punishment after three (days).

When they realized that he was telling the truth and that a Prophet never lies, they went out to the desert with their children and cattle and flocks. They separated the mothers from their children, then they beseeched Allah and pleaded to Him, with the camels and their young groaning, the cows and their calves mooing, and the sheep and their lambs bleating, so Allah spared them from the punishment.

Was there any town that believed (after seeing the punishment), and its faith saved it Except the people of Yunus;

when they believed, We removed from them the torment of disgrace in the life of the world, and permitted them to enjoy for a while. (10:98)

Yunus, meanwhile, went and traveled with some people on a ship, which was tossed about on the sea. The people were afraid that they would drown, so they cast lots to choose a man whom they would throw overboard.

The lot fell to Yunus, but they refused to throw him overboard. This happened a second and a third time.

meaning, the draw went against him, so Yunus stood up, removed his garment and cast himself into the sea.

Then Allah sent from the Green Sea -- according to what Ibn Mas`ud said -- a large fish which cleaved the oceans until it came and swallowed Yunus when he threw himself into the sea.

Allah inspired that large fish not to devour his flesh or break his bones, (as if He said) Yunus is not food for you, rather your belly is a prison for him.

Here Nun refers to the fish; it is correct for it to be attributed to him here.

when he went off in anger,

"Anger towards his people.''

and imagined that We shall not punish him!

meaning, constrict him in the belly of the fish.

Something similar to this was reported from Ibn Abbas, Mujahid, Ad-Dahhak and others.

This was the view favored by Ibn Jarir, and he quoted as evidence for that the Ayah:

But he cried through the depths of darkness (saying): "There is no God but You, Glorified be You! Truly, I have been of the wrongdoers.''

Ibn Mas`ud said regarding the `depths of darkness':

There is no God but You, Glorified be You! Truly, I have been of the wrongdoers.

"When Yunus found himself in the belly of the fish, he thought that he had died. Then he moved his legs. When he moved his legs, he prostrated where he was, then he called out: `O Lord, I have taken a place of worship to You in a place which no other person has reached.'''