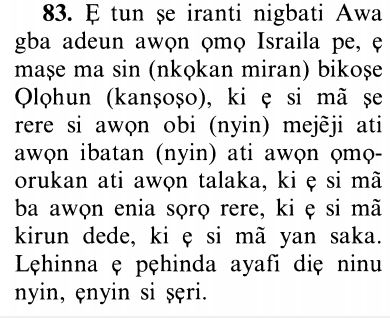 And remember We took a covenant from the Children of Israel (to this effect): Worship none but Allah; treat with kindness your parents and kindred, and orphans and those in need; speak fair to the people; be steadfast in prayer; and practise regular charity. Then did ye turn back, except a few among you, and ye backslide (even now).
And when We made a covenant with the children of Israel: You shall not serve any but Allah and (you shall do) good to (your) parents, and to the near of kin and to the orphans and the needy, and you shall speak to men good words and keep up prayer and pay the poor-rate. Then you turned back except a few of you and (now too) you turn aside.
And (remember) when We made a covenant with the Children of Israel, (saying): Worship none save Allah (only), and be good to parents and to kindred and to orphans and the needy, and speak kindly to mankind; and establish worship and pay the poor-due. Then, after that, ye slid back, save a few of you, being averse.

The Covenant that Allah took from the Children of Israel

And (remember) when We took a covenant from the Children of Israel, (saying): Worship none but Allah (alone) and be dutiful and good to parents, and to kindred, and to orphans and (the poor),

Allah reminded the Children of Israel of the commandments that He gave them, and the covenants that He took from them to abide by those commands, and how they intentionally and knowingly turned away from all of that. Allah commanded them to worship Him and to associate none with Him in worship, just as He has commanded all of His creatures, for this is why Allah created them.

And We did not send any Messenger before you (O Muhammad) but We revealed to him (saying): La ilaha illa Ana (none has the right to be worshipped but I (Allah)), so worship Me (alone and none else). (21:25)

And verily, We have sent among every Ummah (community, nation) a Messenger (proclaiming): "Worship Allah (alone), and avoid the Taghut (all false deities). (16:36)

This is the highest and most important right, that is, Allah's right that He be worshipped alone without partners.

Give thanks to Me and to your parents. Unto Me is the final destination. (31:14)

And your Lord has decreed that you worship none but Him. And that you be dutiful to your parents, (17:23), until,

I said, `O Messenger of Allah! What is the best deed?'

`Performing the prayer on time.'

`Being kind to one's parents.'

`Jihad in the cause of Allah.'

meaning, the young who have no fathers to fend for them.

and Al-Masakin (the poor),

plural for Miskin, the one who does not find what he needs to spend on himself and his family.

We will discuss these categories when we explain the Ayah of Surah An-Nisa where Allah said,

Worship Allah and join none with Him (in worship); and do good to parents. (4:36)

and speak good to people,

meaning, say good words to them and be lenient with them, this includes commanding good and forbidding evil.

`The good saying' means commanding good and forbidding evil, and being patient and forgiving.

The `good words to people', as Allah commanded, also includes every good type of behavior that Allah is pleased with.''

Do not belittle any form of righteousness, and even if you did not find any good deed except meeting your brother with a smiling face, then do so.

This Hadith was also collected by Muslim in his Sahih and At-Tirmidhi, who graded it Sahih.

Allah commands the servants to say good words to people, after He commanded them to be kind to them, thereby mentioning two categories of manners: good speech and good actions.

and perform As-Salah and give Zakah.

Then you slid back, except a few of you, while you are backsliders.

Allah informed us that the People of the Book, except for a few among them, ignored these orders, that is, they knowingly and intentionally abandoned them.

Allah ordered this Ummah similarly in Surah An-Nisa when He said,

Worship Allah and join none with Him (in worship); and do good to parents, kinsfolk, orphans, Al-Masakin (the poor), the neighbor who is near of kin, the neighbor who is a stranger, the companion by your side, the wayfarer (you meet), and those (servants) whom your right hands possess. Verily, Allah does not like such as are proud and boastful. (4:36).

Of these orders, this Ummah has practiced what no other nation before it has, and all praise is due to Allah.