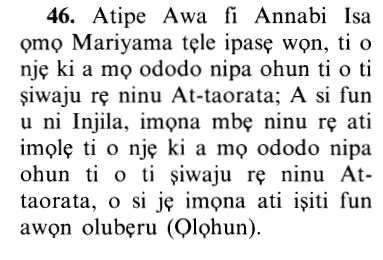 meaning the Prophets of the Children of Israel.

`Isa, son of Maryam, confirming the Tawrah that had come before him,

meaning, he believed in it and ruled by it.

and We gave him the Injil, in which was guidance and light,

a guidance that directs to the truth and a light that removes the doubts and solves disputes,

and confirmation of the Tawrah that had come before it,

meaning, he adhered to the Tawrah, except for the few instances that clarified the truth where the Children of Israel differed.

Allah states in another Ayah that `Isa said to the Children of Israel,

So the scholars say that the Injil abrogated some of the rulings of the Tawrah.

a guidance and an admonition for those who have Taqwa.

means, We made the Injil guidance and an admonition that prohibits committing sins and errors, for those who have Taqwa of Allah and fear His warning and torment.