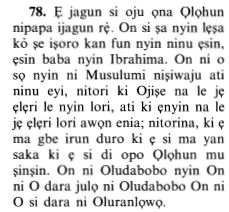 And strive in His cause as ye ought to strive, (with sincerity and under discipline). He has chosen you, and has imposed no difficulties on you in religion; it is the cult of your father Abraham. It is He Who has named you Muslims, both before and in this (Revelation); that the Messenger may be a witness for you, and ye be witnesses for mankind! So establish regular Prayer, give regular Charity, and hold fast to Allah! He is your Protector - the Best to protect and the Best to help!
And strive hard in (the way of) Allah, (such) a striving a is due to Him; He has chosen you and has not laid upon you an hardship in religion; the faith of your father Ibrahim; He named you Muslims before and in this, that the Messenger may be a bearer of witness to you, and you may be bearers of witness to the people; therefore keep up prayer and pay the poor-rate and hold fast by Allah; He is your Guardian; how excellent the Guardian and how excellent the Helper!
And strive for Allah with the endeavour which is His right. He hath chosen you and hath not laid upon you in religion any hardship; the faith of your father Abraham (is yours). He hath named you Muslims of old time and in this (Scripture), that the messenger may be a witness against you, and that ye may be witnesses against mankind. So establish worship, pay the poor-due, and hold fast to Allah. He is your Protecting friend. A blessed Patron and a blessed Helper!

And strive hard in Allah's cause as you ought to strive.

means, with your wealth and your tongues and your bodies.

He has chosen you,

and has not laid upon you in religion any hardship,

He has not given you more than you can bear and He has not obliged you to do anything that will cause you difficulty except that He has created for you a way out. So the Salah, which is the most important pillar of Islam after the two testimonies of faith, is obligatory, four Rak`ahs when one is settled, which are shortened to two Rak`ah when one is traveling.

According to some Imams, only one Rak`ahs is obligatory at times of fear, as was recorded in the Hadith.

A person may pray while walking or riding, facing the Qiblah or otherwise. When praying optional prayers while traveling, one may face the Qiblah or not.

A person is not obliged to stand during the prayer if he is sick; the sick person may pray sitting down, and if he is not able to do that then he may pray lying on his side.

And there are other exemptions and dispensations which may apply to the obligatory prayers and other duties. So the Prophet said:

I have been sent with the easy Hanifi way.

And he said to Mu`adh and Abu Musa, when he sent them as governors to Yemen:

Give good news and do not repel them. Make things easy for the people and do not make the things difficult for them.

And there are many similar Hadiths.

Ibn Abbas said concerning the Ayah, وَمَا جَعَلَ عَلَيْكُمْ فِي الدِّينِ مِنْ حَرَجٍ (and has not laid upon you in religion any hardship),

It is the religion of your father Ibrahim.

"This refers back to the Ayah, وَمَا جَعَلَ عَلَيْكُمْ فِي الدِّينِ مِنْ حَرَجٍ (and has not laid upon you in religion any hardship), meaning, any difficulty.''

On the contrary, He has made it easy for you, like the religion of your father Ibrahim. He said,

"It may be that it means: adhere to the religion of your father Ibrahim.''

I say: This interpretation of the Ayah is like the Ayah:

Say: "Truly, my Lord has guided me to a straight path, a right religion, the religion of Ibrahim, a Hanif. (6:161)

He has named you Muslims both before and in this (Qur'an),

"This refers to Allah, may He be glorified.''

This was also the view of Mujahid, Ata', Ad-Dahhak, As-Suddi, Muqatil bin Hayyan and Qatadah.

"Allah named you Muslims before, in the previous Books and in Adh-Dhikr, وَفِي هَذَا (and in this), means, the Qur'an.''

This was also the view of others, because Allah says:

He has chosen you, and has not laid upon you in religion any hardship,

Then He urged them to follow the Message which His Messenger brought, by reminding them that this was the religion of their father Ibrahim.

Then He mentioned His blessings to this Ummah, whereby He mentioned them and praised them long ago in the Books of the Prophets which were recited to the rabbis and monks. Allah says: هُوَ سَمَّاكُمُ الْمُسْلِمينَ مِن قَبْلُ (He has named you Muslims both before) meaning, before the Qur'an, وَفِي هَذَا (and in this).

Under the explanation of this Ayah, An-Nasa'i recorded from Al-Harith Al-Ash`ari from the Messenger of Allah, who said:

Whoever adopts the call of Jahiliyyah, will be one of those who will crawl on their knees in Hell.

A man said, "O Messenger of Allah, even if he fasts and performs Salah?''

Yes, even if he fasts and performs Salah. So adopt the call of Allah whereby He called you Muslims and believers and servants of Allah.

that the Messenger may be a witness over you and you be witnesses over mankind!

means, `thus We have made you a just and fair nation, the best of nations, and all other nations will testify to your justice. On the Day of Resurrection you will be, شُهَدَاء عَلَى النَّاسِ (witnesses over mankind),' because on that Day all the nations will acknowledge its leadership and its precedence over all others.

So perform the Salah, give Zakah,

Among the most important duties are establishing regular prayer and giving Zakah.

Zakah is a form of beneficence towards Allah's creatures, whereby He has enjoined upon the rich to give a little of their wealth to the poor each year, to help the weak and needy. We have already mentioned its explanation in the Ayah of Zakah in Surah At-Tawbah (9:5).

and hold fast to Allah.

means, seek the help and support of Allah and put your trust in Him, and get strength from Him.

He is your Mawla,

meaning, He is your Protector and your Helper, He is the One Who will cause you to prevail against your enemies.

He is the best Mawla and the best Helper against your enemies.

This is the end of the Tafsir of Surah Al-Hajj. May Allah bless our Prophet Muhammad and his family and Companions, and grant them peace; may Allah honor and be pleased with the Companions and those who follow them in truth until the Day of Resurrection.