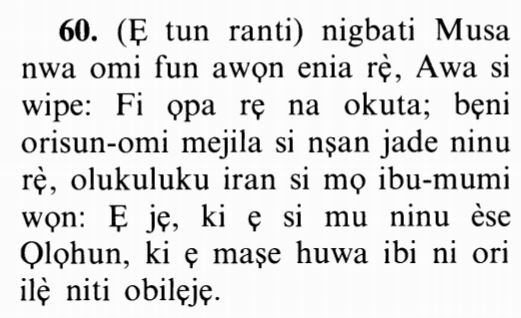 And (remember) when Musa asked for water for his people, We said: "Strike the stone with your stick.'' Then gushed forth therefrom twelve springs. Each (group of) people knew its own place for water. "Eat and drink of that which Allah has provided,

Allah said, "Remember My favor on you when I answered the supplication of your Prophet, Musa, when he asked Me to provide you with water. I made the water available for you, making it gush out through a stone.

Twelve springs burst out of that stone, a designated spring for each of your tribes. You eat from the manna and the quails and drink from the water that I provided for you, without any effort or hardship for you. So worship the One Who did this for you.

And do not act corruptly, making mischief on the earth,

meaning, "Do not return the favor by committing acts of disobedience that cause favors to disappear.''

the Children of Israel, "Had a square stone that Musa was commanded to strike with his staff and, as a result, twelve springs burst out of that stone, three on each side. Each tribe was, therefore, designated a certain spring, and they used to drink from their springs. They never had to travel from their area, they would find the same bounty in the same manner they had in the first area.''

This narration is part of the long Hadith that An-Nasa'i, Ibn Jarir and Ibn Abi Hatim recorded about the trials.

This story is similar to the story in Surah Al-A`raf although the latter was revealed in Makkah.

In Surah Al-A`raf, Allah used the third person when He mentioned the Children of Israel to the Prophet and narrated what He favored them with.

In this Surah Al-Baqarah, which was revealed in Al-Madinah, Allah directed His Speech at the Children of Israel.

describing what first occurred when the water begins to gush out.

In the Ayah in Surah Al-Baqarah, Allah described what happened later on, meaning when the water burst out in full force.