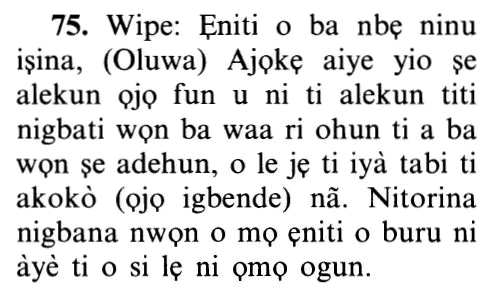 Say: "If any men go astray, (Allah) Most Gracious extends (the rope) to them, until, when they see the warning of Allah (being fulfilled) - either in punishment or in (the approach of) the Hour,- they will at length realise who is worst in position, and (who) weakest in forces!
Say: As for him who remains in error, the Beneficent Allah will surely prolong his length of days, until they see what they were threatened with, either the punishment or the hour; then they shall know who is in more evil plight and weaker in forces
Say: As for him who is in error, the Beneficent will verily prolong his span of life until, when they behold that which they were promised, whether it be punishment (in the world), or the Hour (of doom), they will know who is worse in position and who is weaker as an army.

The Rebellious Person is given Respite but He is not forgotten

This means, "O Muhammad, say to these people who are associating partners with their Lord, while claiming to follow the truth, that they are really following falsehood.''

whoever is in error,

This means, `be they from us or from you.'

the Most Gracious will extend (circumstances) for him.

This means that the Most Beneficent will give him respite in that which he is in, until he meets his Lord and his appointed time will have arrived.

until, when they see that which they were promised, either the torment, (that will strike him),

or the Hour, (that will come suddenly),

they will come to know, (at that time),

who is worst in position, and who is weaker in forces.

This is in refutation of their argument about their nice dwellings and splendid places of gathering. This is a challenge against the idolators who claim that they were following guidance in what they were doing.

This is similar to the challenge that Allah mentions about the Jews when He says,

O you Jews! If you pretend that you are friends of Allah, to the exclusion of (all) other people, then long for death if you are truthful. (62:6)

Meaning, `Supplicate for death to come to those who are following falsehood among us if you truly claim to be upon the truth. If you are true, then this supplication will not harm you.' But they refused to do so. An extensive discussion of this has already preceded in Surah Al-Baqarah, and to Allah is the praise.

Likewise, Allah mentioned the challenge that was given to the Christians in Surah Al Imran, when they were persistent in their disbelief and continued in their transgression. They refused to give up their exaggerating claim that `Isa was the son of Allah. Therefore, Allah mentioned His arguments and proofs against the worship of `Isa, and that he was merely a creature like Adam.

After this, Allah said,

Then whoever disputes with you about him after (all this) knowledge that has come to you, say: "Come, let us call our sons and your sons, our women and your women, ourselves and yourselves - then we pray and invoke (sincerely) the curse of Allah upon those who lie.'' (3:61)

However, they (the Christians) also retreated from this challenge.