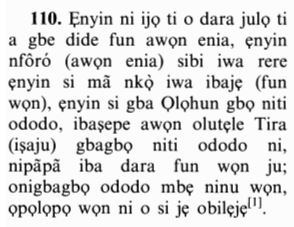 Ye are the best of peoples, evolved for mankind, enjoining what is right, forbidding what is wrong, and believing in Allah. If only the People of the Book had faith, it were best for them: among them are some who have faith, but most of them are perverted transgressors.
You are the best of the nations raised up for (the benefit of) men; you enjoin what is right and forbid the wrong and believe in Allah; and if the followers of the Book had believed it would have been better for them; of them (some) are believers and most of them are transgressors.
Ye are the best community that hath been raised up for mankind. Ye enjoin right conduct and forbid indecency; and ye believe in Allah. And if the People of the Scripture had believed it had been better for them. Some of them are believers; but most of them are evil-livers.

(Ye are the best community that hath been raised up for mankindﾅ) [3:110]. Ikrimah and Muqatil said: ﾓThis was revealed about [Abd Allah] Ibn Masud, Ubayy ibn Kab, Muadh ibn Jabal and Salim, the client of Abu Hudhayfah. Malik ibn al-Dayf and Wahb ibn Yahudha, both of them Jews, had said to them: Our religion is better than that to which you call us; and we are also more virtuous and better than youﾒ. And Allah, exalted is He, revealed this verse as a response to themﾔ.

Virtues of the Ummah of Muhammad صلى الله عليه وسلم, the Best Nation Ever

Allah states that the Ummah of Muhammad is the best nation ever,

You are the best of peoples ever raised up for mankind,

Al-Bukhari recorded that Abu Hurayrah commented on this Ayah,

"(You, Muslims, are) the best nation of people for the people, you bring them tied in chains on their necks (capture them in war) and they later embrace Islam.''

Similar was said by Ibn Abbas, Mujahid, Atiyah Al-Awfi, Ikrimah, Ata and Ar-Rabi bin Anas that, كُنتُمْ خَيْرَ أُمَّةٍ أُخْرِجَتْ لِلنَّاسِ (You are the best of peoples ever raised up for mankind),

means, the best of peoples for the people.

The meaning of the Ayah is that the Ummah of Muhammad is the most righteous and beneficial nation for mankind. Hence Allah's description of them,

you enjoin Al-Ma`ruf and forbid Al-Munkar and believe in Allah.

You are the final of seventy nations, you are the best and most honored among them to Allah.

This is a well-known Hadith about which At-Tirmidhi said, "Hasan'', and which is also narrated from Mu`adh bin Jabal and Abu Sa`id.

The Ummah of Muhammad achieved this virtue because of its Prophet, Muhammad, peace be upon him, the most regarded of Allah's creation and the most honored Messenger with Allah. Allah sent Muhammad with the perfect and complete Law that was never given to any Prophet or Messenger before him. In Muhammad's Law, few deeds take the place of the many deeds that other nations performed. For instance, Imam Ahmad recorded that Ali bin Abi Talib said,

"The Messenger of Allah said,

I was given what no other Prophet before me was given.

We said, `O Messenger of Allah! What is it?'

I was given victory by fear,

I was given the keys of the earth,

I was called Ahmad,

the earth was made a clean place for me (to pray and perform Tayammum with it),

and my Ummah was made the best Ummah.''

The chain of narration for this Hadith is Hasan.

There are several Hadiths that we should mention here.

The Two Sahihs recorded that Az-Zuhri said that, Sa`id bin Al-Musayyib said that Abu Hurayrah narrated to him,

"I heard the Messenger of Allah saying,

A group of seventy thousand from my Ummah will enter Paradise, while their faces are radiating, just like the moon when it is full.'

Ukkashah bin Mihsan Al-Asadi stood up, saying, `O Messenger of Allah! Supplicate to Allah that I am one of them.'

A man from the Ansar also stood and said, `O Messenger of Allah! Supplicate to Allah that I am one of them.'

Ukkashah has beaten you to it.'

"I heard the Messenger of Allah saying,

`I hope that those who follow me will be one-fourth of the residents of Paradise on the Day of Resurrection.'

`I hope that they will be one-third of the people.'

Imam Ahmad recorded the same Hadith with another chain of narration, and this Hadith meets the criteria of Muslim in his Sahih.

In the Two Sahihs, it is recorded that Abdullah bin Mas`ud said,

"The Messenger of Allah said to us,

Does it please you that you will be one-fourth of the people of Paradise?

Does it please you that you will be one-third of the people of Paradise?

I hope that you will be half of the people of Paradise.''

The people of Paradise are one hundred and twenty rows, this Ummah takes up eighty of them.

Imam Ahmad also collected this Hadith through another chain of narration.

We (Muslims) are the last to come, but the foremost on the Day of Resurrection, and the first people to enter Paradise, although the former nations were given the Scriptures before us and we after them. Allah gave us the guidance of truth that they have been disputing about.

This (Friday) is the Day that they have been disputing about, and all the other people are behind us in this matter: the Jews' (day of congregation is) tomorrow (Saturday) and the Christians' is the day after tomorrow (Sunday).

Al-Bukhari and Muslim collected this Hadith.

We (Muslims) are the last (to come), but (will be) the foremost on the Day of Resurrection, and will be the first people to enter Paradise... until the end of the Hadith.

These and other Hadiths conform to the meaning of the Ayah, كُنتُمْ خَيْرَ أُمَّةٍ أُخْرِجَتْ لِلنَّاسِ تَأْمُرُونَ بِالْمَعْرُوفِ وَتَنْهَوْنَ عَنِ الْمُنكَرِ وَتُؤْمِنُونَ بِاللّهِ (You are the best of peoples ever raised up for mankind; you enjoin Al-Ma`ruf (all that Islam has ordained) and forbid Al-Munkar (all that Islam has forbidden), and you believe in Allah).

Therefore, whoever among this Ummah acquires these qualities, will have a share in this praise.

"We were told that Umar bin Al-Khattab recited this Ayah (3:110) during a Hajj that he performed, when he saw that the people were rushing. He then said, `Whoever likes to be among this (praised) Ummah, let him fulfill the condition that Allah set in this Ayah.'''

Those from this Ummah who do not acquire these qualities will be just like the People of the Scriptures whom Allah criticized, when He said, كَانُواْ لاَ يَتَنَاهَوْنَ عَن مُّنكَرٍ فَعَلُوهُ (They did not forbid one another from the Munkar which they committed... (5:79).

This is the reason why, after Allah praised the Muslim Ummah with the qualities that He mentioned, He criticized the People of the Scriptures and chastised them, saying,

And had the People of the Scripture (Jews and Christians) believed,

in what was sent down to Muhammad.

it would have been better for them; among them are some who have faith, but most of them are Fasiqun (rebellious).

Therefore only a few of them believe in Allah and in what was sent down to you and to them. The majority of them follow deviation, disbelief, sin and rebellion.