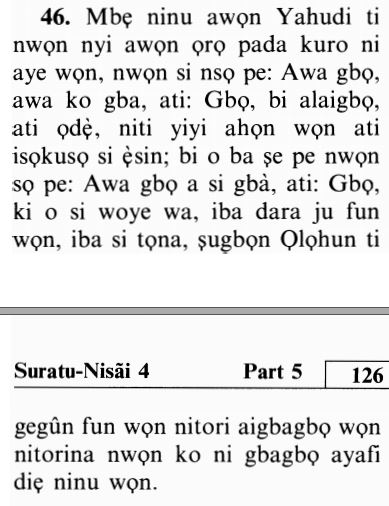 Among those who are Jews, there are some who displace words from (their) right places,

meaning, they intentionally and falsely alter the meanings of the Words of Allah and explain them in a different manner than what Allah meant.

And say: "We hear your word and disobey,

saying, "We hear what you say, O Muhammad, but we do not obey you in it.''

This is the implied meaning of the Ayah, and it demonstrates the Jews' disbelief, stubbornness and disregard for Allah's Book after they understood it, all the while aware of the sin and punishment that this behavior will earn for them.

And "Hear and let you hear nothing.''

means, hear our words, may you never hear anything.

This is the Jews' way of mocking and jesting, may Allah's curse descend on them.

And Ra`ina, with a twist of their tongues and as a mockery of the religion.

meaning, they pretend to say, `Hear us,' when they say, Ra`ina (an insult in Hebrew, but in Arabic it means `Listen to us.').' Yet, their true aim is to curse the Prophet.

Therefore, Allah said about them, while they pretend to say other than what they truly mean, لَيًّا بِأَلْسِنَتِهِمْ وَطَعْنًا فِي الدِّينِ (With a twist of their tongues and as a mockery of the religion) because of their cursing the Prophet.

And if only they had said: "We hear and obey'', and "Do make us understand,'' it would have been better for them, and more proper; but Allah has cursed them for their disbelief, so they believe not except a few.

meaning, their hearts are cast away from the path of righteousness and therefore, no beneficial part of faith enters it.

Earlier, when we explained, فَقَلِيلاً مَّا يُؤْمِنُونَ (so little is that which they believe) (2:88) which means they do not have beneficial faith.