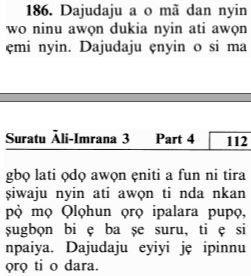 The Believer is Tested and Hears Grieving Statements from the Enemy

You shall certainly be tried and tested in your wealth and properties and in yourselves,

just as He said in another Ayah,

And certainly, We shall test you with something of fear, hunger, loss of wealth, lives and fruits. (2:155)

and you shall certainly hear much that will grieve you from those who received the Scripture before you (Jews and Christians) and from those who ascribe partners to Allah.

Allah said to the believers upon their arrival at Al-Madinah, before Badr, while comforting them against the harm they suffered from the People of the Scriptures and the polytheists;

but if you persevere patiently, and have Taqwa, then verily, that will be a determining factor in all affairs.

Therefore, Allah commanded the believers to be forgiving, patient and forbearing until He brought His awaited aid.

Allah's Messenger rode a donkey with a saddle covered by a velvet sheet and let Usamah ride behind him (on the donkey). The Prophet wanted to visit Sa`d bin Ubadah in Bani Al-Harith bin Al-Khazraj, and this occurred before the battle of Badr.

The Messenger of Allah greeted the gathering with Salam, called them to Allah and recited some of the Qur'an to them.

Abdullah bin Ubayy said, `O fellow! No other speech is better than what you said, if it was true! However, do not bother us in our gatherings. Go back to your place and whoever came to you, narrate your stories to him.'

Abdullah bin Rawahah said, `Rather, O Messenger of Allah! Attend our gatherings for we like that.'

The Muslims, Mushriks and Jews then cursed each other, and they almost fought with each other. The Prophet tried to calm them down, until they finally settled.

The Prophet rode his donkey and went to Sa`d bin Ubadah, saying, `O Sa`d! Have you heard what Abu Hubbab said (meaning Abdullah bin Ubayy)? He said such and such things.'

Sa`d said, `O Messenger of Allah! Forgive and pardon him. By Allah, Who sent down the Book to you, Allah brought us the truth that you came with at a time when the people of this city almost appointed him king. When Allah changed all that with the truth that He gave you, he choked on it, and this is the reason behind the behavior you saw from him.'

and you shall certainly hear much that will grieve you from those who received the Scripture before you (Jews and Christians) and from those who ascribe partners to Allah;

Many of the People of the Scripture (Jews and Christians) wish that they could turn you away as disbelievers after you have believed, out of envy from their own selves, even after the truth has become manifest unto them. But forgive and overlook, till Allah brings His command. (2:109)

The Prophet used to implement the pardon that Allah commanded him until He gave His command (to fight the disbelievers).

When the Messenger fought at Badr, and Allah killed, by his hand, the leaders of the disbelievers from Quraysh, Abdullah bin Ubayy bin Salul and the Mushriks and idol worshippers who were with him said, `This matter has prevailed,' and they gave their pledge to the Prophet and became Muslims.''

Therefore, every person who stands for truth, enjoins righteousness and forbids evil, will be harmed in some manner. In such cases, there is no cure better than being patient in Allah's cause, trusting in Him and returning to Him.