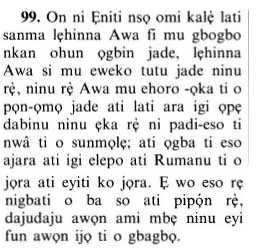 It is He Who sendeth down rain from the skies: with it We produce vegetation of all kinds: from some We produce green (crops), out of which We produce grain, heaped up (at harvest); out of the date-palm and its sheaths (or spathes) (come) clusters of dates hanging low and near: and (then there are) gardens of grapes, and olives, and pomegranates, each similar (in kind) yet different (in variety): when they begin to bear fruit, feast your eyes with the fruit and the ripeness thereof. Behold! in these things there are signs for people who believe.
And He it is Who sends down water from the cloud, then We bring forth with it buds of all (plants), then We bring forth from it green (foliage) from which We produce grain piled up (in the ear); and of the palm-tree, of the sheaths of it, come forth clusters (of dates) within reach, and gardens of grapes and olives and pomegranates, alike and unlike; behold the fruit of it when it yields the fruit and the ripening of it; most surely there are signs in this for a people who believe.
He it is Who sendeth down water from the sky, and therewith We bring forth buds of every kind; We bring forth the green blade from which We bring forth the thick-clustered grain; and from the date-palm, from the pollen thereof, spring pendant bunches; and (We bring forth) gardens of grapes, and the olive and the pomegranate, alike and unlike. Look upon the fruit thereof, when they bear fruit, and upon its ripening. Lo! herein verily are portents for a people who believe.

It is He Who sends down water (rain) from the sky,

in due measure, as a blessing and provision for the servants, relief and means of survival for the creatures and mercy from Allah for His creation.

And with it We bring forth vegetation of all kinds,

and out of it We bring forth green stalks,

green produce and trees, on which We grow seeds and fruits.

from which We bring forth thick clustered grain.

lined on top of each other in clusters, like an ear or spike of grain.

And out of the date-palm and its sprouts come forth clusters,

Within reach and easy to pick.

This was recorded by Ibn Jarir.

and gardens of grapes,

means, We bring forth gardens of grapes.

Grapes and dates are the most precious fruits to the people of Al-Hijaz (Western Arabia), and perhaps both are the best fruits in this world. Allah has reminded His servants of His favor in making these two fruits for them, when He said,

And from the fruits of date-palms and grapes, you derive strong drink and a goodly provision. (16:67),

before intoxicating drinks were prohibited, and;

And We have made therein gardens of date-palms and grapes. (36:34)

olives and pomegranates, each similar yet different.

According to the explanation of Qatadah and several others,

The leaves are similar in shape and appearance, yet different in the shape, and taste. And the kind of fruit each plant produces is different.

Look at their fruits when they begin to bear, and Yan`ih.

means, when the fruits become ripe.

This Ayah means, contemplate the ability of the Creator of these fruits, Who brought them into existence after they were dry wood, and they later became grapes and dates; and similar is the case with the various colors, shapes, tastes and fragrance of whatever Allah created. Allah said,

And in the earth are neighboring tracts, and gardens of vines, and green crops, and date-palms, growing out, two or three from a single stem root, or otherwise, watered with the same water, yet some of them We make better than others to eat. (13:4)

In these things there are... (O people),

and proofs that testify to the perfect ability, wisdom and mercy of He Who created these things,

for people who believe.

in Allah and obey His Messengers.