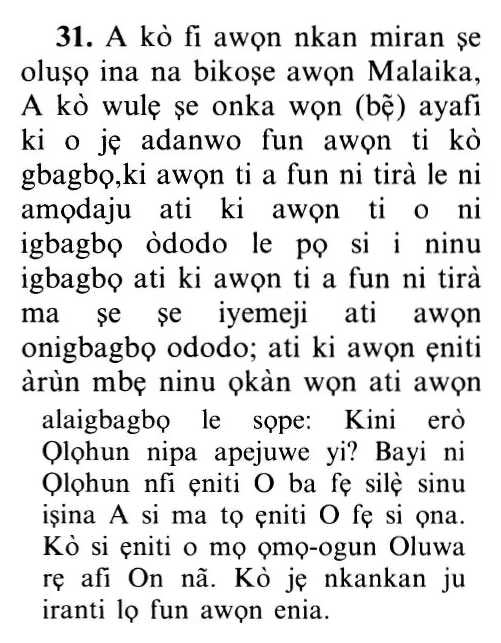 And We have set none as (Ashab) guardians of the Fire,

This is a refutation of the idolators of the Quraysh when they mentioned the number of guardian angels. Abu Jahl said,

"O people of Quraysh! Are not every ten among you able to defeat one of them''

And We have set none but angels as guardians of the Fire.

meaning, extremely strong in their creation. They cannot be stood against nor defeated.

It has been said that Abu Al-Ashaddayn, and his name was Kaladah bin Usayd bin Khalaf, said,

"O people of Quraysh! You defend me against two of them and I will defend you against seventeen of them.''

He said this thinking himself to be very great. For they claimed that he achieved such strength that he would stand on a skin of cow hide and ten people would try to pull it out from under his feet, but the skin would be torn to pieces and still not be removed from under him.

And We have fixed their number only as a trial for the disbelievers,

meaning, `We only have mentioned their number as being nineteen as a test from Us for mankind.'

In order that the People of the Scripture may arrive at a certainty,

meaning, so that they may know that this Messenger is true. For he speaks according to the same thing that they have with them of heavenly revealed Scriptures that came to the Prophets before him.

and that the believers may increase in faith.

meaning, to their faith. This is due to what they witness from the truthfulness of the information of their Prophet, Muhammad.

and that no doubt may be left for the People of the Scripture and the believers, and that those in whose hearts is a disease,

meaning, among the hypocrites.

and the disbelievers may say: "What does Allah intend by this example''

meaning, they say, "What is the wisdom in mentioning this here''

meaning, by way of examples like this, faith becomes firm in the hearts of some people and it is shaken with others.

This has a profound wisdom and it is an irrefutable proof. None knows the Soldiers of Allah except Him.

And none can know the hosts of your Lord but He.

meaning, none knows their number and their count except Allah.

This is so that one does not make the mistake of thinking that they are only nineteen in all. It has been confirmed in the Hadith concerning Al-Isra' that is reported in the Two Sahihs and other collections, that the Messenger of Allah said in describing the Frequented House (Al-Bayt Al-Ma`mur), which is in the seventh heaven,

Seventy thousand angels enter into it every day and they do not return to it as it is all that is due upon them (one visit in their lifetime).

And this is nothing but a reminder to mankind.

Mujahid and others said,

وَمَا هِيَ And this is not.

"This means the Hellfire which has been described.''

but a reminder to mankind.