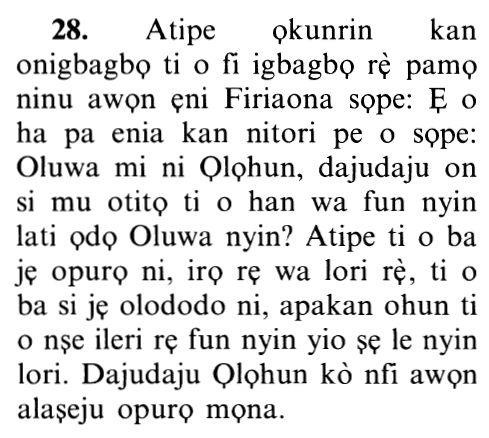 Musa was supported by a believing Man from Fir`awn's Family

And a believing man of Fir`awn's family, who hid his Faith said: "Would you kill a man because he says: `My Lord is Allah,'

The well-known view is that this believing man was a Coptic (Egyptian) from the family of Fir`awn.

As-Suddi said, he was a cousin (son of the paternal uncle) of Fir`awn. And it was said that he was the one who was saved along with Musa, peace be upon him.

Ibn Jurayj reported that Ibn Abbas, may Allah be pleased with him, said,

"No one from among the family of Fir`awn believed apart from this man, the wife of Fir`awn, and the one who said, يَا مُوسَى إِنَّ الْمَلَأَ يَأْتَمِرُونَ بِكَ لِيَقْتُلُوكَ ("O Musa! Verily, the chiefs are taking counsel together about you, to kill you.'')'' (28:20)

This was narrated by Ibn Abi Hatim.

This man concealed his Faith from his people, the Egyptians, and did not reveal it except on this day when Fir`awn said, ذَرُونِي أَقْتُلْ مُوسَى (Leave me to kill Musa).

The man was seized with anger for the sake of Allah, and the best of Jihad is to speak a just word before an unjust ruler, as is stated in the Hadith. There is no greater example of this than the words that this man said to Fir`awn:

Would you kill a man because he says: `My Lord is Allah,

Al-Bukhari narrated a similar story in his Sahih from `Urwah bin Az-Zubayr, may Allah be pleased with him, who said:

"I said to `bdullah bin `Amr bin Al-`As, may Allah be pleased with him: `Tell me, what was the worst thing the idolators did to the Messenger of Allah?'

Would you kill a man because he says: `My Lord is Allah,' and he has come to you with clear signs from your Lord.'''

This was recorded by Al-Bukhari.

and he has come to you with clear signs from your Lord,

means, "how can you kill a man just because he says, `My Lord is Allah,' and he brings proof that what he is saying is the truth''

Then, for the sake of argument, he went along with them and said,

And if he is a liar, upon him will be (the sin of) his lie; but if he is telling the truth, then some of that (calamity) wherewith he threatens you will befall on you.

meaning, `if you do not believe in what he is saying, then it is only common sense to leave him alone and not harm him; if he is lying, then Allah will punish him for his lies in this world and in the Hereafter. If he is telling the truth and you harm him, then some of what he is warning about will happen to you too, because he is threatening you with punishment in this world and in the Hereafter if you go against him. It is possible that he is telling the truth in your case, so you should leave him and his people alone, and not harm them.'

Allah tells us that Musa asked Fir`awn and his people to leave them in peace, as Allah says:

And indeed We tried before them Fir`awn's people, when there came to them a noble Messenger, saying: "Deliver to me the servants of Allah. Verily, I am to you a Messenger worthy of all trust. And exalt not yourselves against Allah. Truly, I have come to you with a manifest authority. And truly, I seek refuge with my Lord and your Lord, lest you should stone me. But if you believe me not, then keep away from me and leave me alone.'' (44:17-21)

Similarly, the Messenger of Allah told the Quraysh to leave him alone and let him call the servants of Allah to Allah; he asked them not to harm him, and to uphold the ties of kinship that existed between him and them, by not harming him.

meaning, `do not harm me, because of the ties of kinship that exist between me and you; so do not harm me, and let me address my call to the people.'

This was the basis of the truce agreed upon on the day of Al-Hudaybiyyah, which was a manifest victory.

Verily, Allah guides not one who is a transgressor, a liar!

means, `if the one who claims to have been sent by Allah is a liar, as you say, this would be obvious to everyone from his words and deeds, for they would be inconsistent and self-contradictory. But we can see that this man is upright and what he says is consistent. If he was a sinner and a liar, Allah would not have guided him and made his words and actions rational and consistent as you see them.'

Then this believer warned his people that they would lose the blessings Allah bestowed upon them and that the vengeance of Allah would befall them: