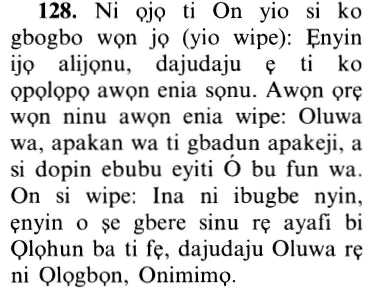 One day will He gather them all together, (and say): "O ye assembly of Jinns! Much (toll) did ye take of men." Their friends amongst men will say: "Our Lord! we made profit from each other: but (alas!) we reached our term - which thou didst appoint for us." He will say: "The Fire be your dwelling-place: you will dwell therein for ever, except as Allah willeth." for thy Lord is full of wisdom and knowledge.
And on the day when He shall gather them all together: O assembly of jinn! you took away a great part of mankind. And their friends from among the men shall say: Our Lord! some of us profited by others and we have reached our appointed term which Thou didst appoint for us. He shall say: The fire is your abode, to abide in it, except as Allah is pleased; surely your Lord is Wise, Knowing.
In the day when He will gather them together (He will say): O ye assembly of the jinn! Many of humankind did ye seduce. And their adherents among humankind will say: Our Lord! We enjoyed one another, but now we have arrived at the appointed term which Thou appointedst for us. He will say: Fire is your home. Abide therein for ever, save him whom Allah willeth (to deliver). Lo! thy Lord is Wise, Aware.

Allah says, `Mention, O Muhammad, in what you convey and warn,' that,

on the Day when He will gather them (all) together.

gather the Jinns and their loyal supporters from mankind who used to worship them in this life, seek refuge with them, obey them and inspire each other with adorned, deceitful speech.

Allah will proclaim then,

O you assembly of Jinn! Many did you mislead of men,

So the Ayah; قَدِ اسْتَكْثَرْتُم مِّنَ الإِنسِ (Many did you mislead of men) refers to their misguiding and leading them astray.

Did I not command you, O Children of Adam, that you should not worship Shaytan. Verily, he is a plain enemy to you. And that you should worship Me. That is the straight path. And indeed he (Shaytan) did lead astray a great multitude of you. Did you not, then, understand. (36:60-62)

and their friends among the people will say: "Our Lord! We benefited one from the other...''

The friends of the Jinns among humanity will give this answer to Allah, after Allah chastises them for being misguided by the Jinns.

"They benefited from each other when the Jinns merely commanded and mankind obeyed.''

"During the time of Jahiliyyah, a man would reach a land and proclaim, `I seek refuge with the master (Jinn) of this valley,' and this is how they benefited from each other. They used this as an excuse for them on the Day of Resurrection.''

Therefore, the Jinns benefit from humans since humans revere the Jinns by invoking them for help. The Jinns would then proclaim, "We became the masters of both mankind and the Jinns.''

but now we have reached our appointed term which You did appoint for us.

meaning, death, according to As-Suddi.

where you will reside and live, you and your friends,

you will dwell therein forever.

and will never depart except what Allah may will.

except as Allah may will.

Certainly your Lord is All-Wise, All-Knowing."